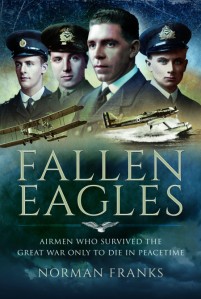 A book should be about the size of an airport terminal. Not too rudimentary, and not too overblown with distractions either – but still big enough to deliver all the anticipation, preparation, challenge and satisfaction you’d expect for your planned flight.

That’s not how this one works though. Rather than take us from the front entrance to a single departure gate, Norman Franks starts at one end of the building and walks us along the entire concourse instead.

Fallen Eagles – Airmen Who Survived The Great War Only To Die In Peacetime, to give it it’s full title, is an amazing roll call of World War One pilots who gave their lives to aviation, rather than their countries.

It gives us a chance to walk down that metaphorical concourse and look over a whole line-up of different aviation stories. Each one contains a satisfying level of detail, as well enough info to start researching an especially interesting case in more detail if you want to.

The most skilled and famous

Franks has compiled short biographies for more than ninety (yep, 90+) aviators – ALL of whom were decorated wartime officers, and ALL of whom were killed in aviation accidents during the 21 short years between Armistice in 1918 and the re-opening of Anglo-German hostilities on September 3rd, 1939 (with one exception).

These were not inexperienced pilots either. They were the most skilled and famous pilots of their day. They had survived flight training and combat, many were aces and almost all had at least a Distinguished Flying Cross to their credit. Many had the Military Cross too, bars to their DFCs and DSOs, a scattering of VCs, and ranks ranging from humble Flight Lieutenants to an Air Vice Marshall. At least three had been knighted for their post-war flying achievements.

That all makes it sound like a very British honour roll and, to be fair, English pilots do dominate. But I also found pilots who hailed from Ireland, France, South Africa, Pakistan, Australia, New Zealand, Canada and the USA… Sadly, none from the Central Powers or Russia though, which would have added appreciable depth.

I’m distracting you from the value of what is here though… This format of short narratives makes this one of those books that are perfect for a ‘quick dip’ whenever you have a few minutes to spare. Commuting, for example. Or sitting at the gate in an actual airport concourse, waiting to enjoy the aviation world those young men helped develop.

As you do, you’ll come across some of the most famous names in flying – like Sir John Alcock who (with Sir Arthur Brown) was first to fly non-stop across the Atlantic and then, in bitter irony, was killed on a short flight between England and France. Did you know he had learned to fly at Brooklands before the war, or that he’d proved equally skilled in Sopwith Triplanes, Sopwith Camels and giant Handley-Page 0/100 bombers in the Royal Naval Air Service?

Others include Sir Charles Kingsford-Smith who achieved so much in post-war aviation, including the first ever trans-Pacific flight in 1928, before disappearing during an England-Australia record attempt in 1935.

But Fallen Eagles will help you discover the forgotten aviators too. For example, first  up is Captain Stearne Tighe Edwards, DSC and Bar – a 16-victory ace and air fighting instructor from Ontario, Canada, who was fatally injured in a crash the day after peace was declared.

Or there’s Captain Cedric ‘Spike’ Howell DSO, MC, DFC, MiD (2), a native of my home Adelaide, who served at Gallipoli, on the Somme, achieved 19 air victories, survived being an instructor at the Central Flying School, but crashed and was killed off Corfu while attempting to win the prize for the first flight from England to Australia in December 1919.

Incidentally, that £10,000 was won by another Adelaidian, Sir Ross Smith, KCB, MC & Bar, DFC and two Bars, AFC; who, just as sadly, was destined to have his own entry in Fallen Eagles – killed while preparing for a round-the-world flight in April 1922.

As I mentioned, there are more than 90 fascinating, heroic and ultimately tragic stories like this to discover and explore.

And, along with the obituaries of those daring young men in their flying machines, there is the fascination of the flying machines themselves. The many photos that decorate the text, while small and black-and-white, are a showcase of the diverse machines that pushed back the frontiers of flight through the 1920s and 1930s.

Plenty were battle-tested military machines, of course, but just as many were innovative designs and some were directly responsible for their pilot’s untimely death.

The good, the bad, and the ugly

A good example is the Mignet HM14 Flying Flea – a 1930s attempt to popularise flying with one of the earliest plans-built aircraft. Unfortunately this tiny design was aerodynamically flawed, and would enter an uncontrollable dive if the pilot pushed the nose forward to avoid a stall. This was exactly the kind of accident that killed Squadron Leader CR Davidson MC, MiD on May 21st, 1936 at Digby, England.

The range of types on show – the good, the bad, and the ugly, if you like – includes the huge Handley Page 0/400 bomber, bulbous Vickers Vernon, rare 1929 Fairey Long Range Monoplane, sublime Supermarine S5 racer, a USAS Salmson 2A2 observation plane, a Maachi 9 flying boat, and even a captured Fokker D.VII.

It’s all a stark reminder that aeronautics was forced to grow up fast during World War One, just like its young pilots.

By the time hostilities ended, both the science and derring-do of flight had left a lot of vital underlying knowledge far behind. Aviation needed to return to exploration, and many of its explorers would pay highly.

The shooting may have stopped, but flying still offered plenty of ways to die.

So despite not being about pilots who were killed in action, Fallen Eagles is still an honour roll – for those who fell in aviation’s war against the unknown.

Lest we forget them, too.

I wrote this review at the invitation of the publisher, Pen & Sword Aviation. If you’ve heard of them, you’ll know they’re one of the UK’s leading military and aviation publishers, so I was more than happy to agree.

Pen & Sword were kind enough to provide a review copy of the book, but no money has changed hands and the views I’ve expressed are entirely my own.