Okay, it took a little longer than we anticipated, but I’m pleased to present the second batch of photos from last September’s Africa Aerospace and Defence (AAD) 2016 exhibition in South Africa, courtesy of local photographer Niel Swart. (Part One is here.)

The best of the rest

Africa’s pre-eminent aviation event, AAD2016 was held at the SAAF base at Waterkloof, between Pretoria and Johannesburg. Over 500 trade exhibitors from 105 different countries were present, along with large crowds of industry professionals and local enthusiasts.

Air Force elements from a number of countries also displayed their hardware, alongside the civil exhibitors and a couple of notable museum aircraft.

The show’s unique position, both physically and politically, means it attracts a unique mix of participants – including many aircraft and aerospace companies that are rarely seen in Europe, North American or Australia. So this virtual tour of the rest of the world’s aviation industry is a real treat.

A classic example is the SAFAT03 – an all-metal two-seat light utility aircraft manufactured in Sudan. Who (outside of Africa) even knew Sudan had an aircraft industry? And yet, regardless of the political situation, as a country of over 40 million people, why wouldn’t they??

Most of these photos come from later on Saturday and into the Sunday (September 17th and 18th, 2016 respectively), as dust and storms made flying – or even photographing the aircraft – increasingly difficult.

At the same time, though, the conditions created some very interesting atmospheric effects and colour contrasts… So what you lose on the swings, you gain on the roundabouts.

I have to add a huge ‘thanks’, once again, to Niel for selflessly subjecting himself to two solid days of awesome airshow action and then sharing his photos with airscape. 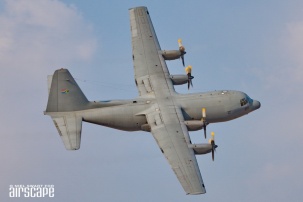 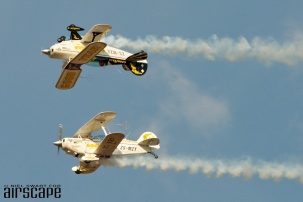 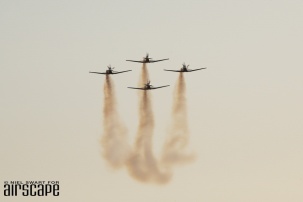 Smoke on! Adding to the growing haze of the Saturday afternoon, the SAAF Silver Falcons display team on approach. (© Niel Swart)

Designed in China by Nanchang and built by Hongdu, this JL-8 (cn 2703J) serves as one of the Air Force of Zimbabwe’s 10 Karakorum K-8 jet trainers. (© Niel Swart)

6 thoughts on “Look back in amazement”