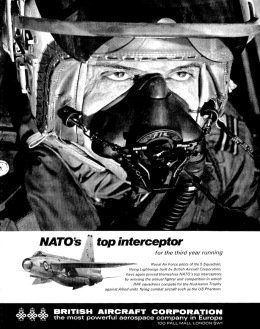 For a generation of jet jocks, it was the ultimate ride – a seat you didn’t say ‘no’ to: The English Electric Lightning was a thundering, twin-Avon brute of a point defence fighter, designed around the single-minded mission brief of reaching high-flying hostile bombers before they could harm the UK’s vital airfields and other infrastructure… It was an echo of the Battle of Britain, re-imagined for the jet age.

That mission focus, and the formidable time-to-climb performance it spawned, was what made the Lightning such an irresistible draw. And such a success.

Hard numbers on the ‘Frightening’ were a closely guarded secret throughout the Cold War and are still hard to find. Early models had a maximum level speed of Mach 1.7 while later marks were rated at Mach 2.0.

Mind you those speeds needed full afterburner and, like all classic British jet fighters, the Lightning was low on fuel almost from the moment the wheels came up. Later models would grow semi-streamlined belly tanks and over-wing auxiliary tanks that doubled as aerodynamic shock bodies, but the problem never really went away. You simply can’t run two Avons at full afterburner without being too far from a tanker (or a friendly air base).

Service ceiling seems to have been around 60,000 feet but that, too, is a hazy figure. Trial intercepts on USAF U-2s were conducted successfully above that altitude, Lightnings being positioned for an attack on U-2s flying at 66,000 feet. 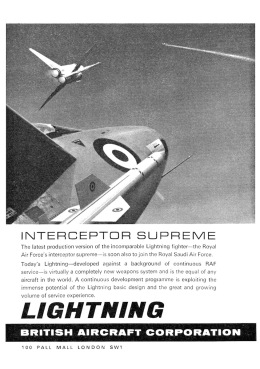 But the figure that really got fighter pilots wet around the collar was the fabled rate of climb. According to the F Mk.6 Operating Data Manual quoted on Wikipedia a Lightning could go from runway threshold to 36,000 feet in 3 minutes.

The optimum rate was 20,000 feet per minute at 450 knots (100 m/s at 833 kph) – which the jet could comfortably maintain all the way up to the tropopause. In his 1970 report (and airscape’s next post) Flight International magazine’s John Bentley was treated to a performance climb in a T Mk.5 that stabilised at 230 knots with the aircraft 70º nose up.

They levelled off at 30,000 feet just 70 seconds after brakes release. Some Trainer.

For all that and its ominous nickname, the ‘Frightening’ was reputedly rather pleasant to fly… Another hallmark – along with the primary mission and light fuel load – of its Battle of Britain ancestors.

In Testing Early Jets (London: Airlife, 1990. ISBN 1-85310-158-3), Chief Test Pilot for the Lightning Roland ‘Bee’ Beamont  declared nothing at the time, including the US Century-series fighters, came close to the Lightning for inherent stability, control and docile handling.

He added that the turn performance and buffet boundaries of the Lightning were well in advance of anything else he’d flown.

Later tests would see Lightnings easily out-perform F-104 Starfighters in time-to-height and acceleration trials, and continue to hold their own against ‘Teen-series’ fighters like the F-15 Eagle.1

Not bad for a dedicated interceptor first drawn up in 1947.

At first glance, it might seem like the English Electric company burst into the jet age from nowhere, with two absolute killer designs – the Canberra bomber and the Lightning interceptor.

Until then, they’d mainly been known  for making railway locos and industrial motors.

But of course English Electric hadn’t suddenly seen the 1950s as an opportunity to expand into the feather edge of aviation development. Formed in December 1918, the business had was born from the amalgamation of five companies that had spent World War One making arms, munitions and aeroplanes.

The new concern struggled through the 1920s then, paradoxically, recovered strongly during the depths of the Great Depression. Manufacturing electric motors, diesel motors, steam turbines, water turbines, generators, transformers, and more the company was no stranger to precision engineering. And when Britain began to re-arm in 1935 the business rediscovered its aviation heritage and began to make Hampden then Halifax airframes for Handley-Page.

By war’s end, English Electric were also making fuselages for the revolutionary de Havilland Vampire jet fighter – the world’s fastest aircraft at that time. They would produce over 1,300 of them at their Samlesbury factory in Lancashire.

But in July 1944, the company made the watershed move of recruiting ‘Teddy’ Petter to establish its new aircraft design office. Petter was one of the country’s leading designers, having created the hugely successful Lysander and vastly underrated Whirlwind for Westland, as well as making a crucial contribution to resolving the Spitfire’s growing longitudinal stability issues and enabling that aircraft’s lengthy development.

Once established at English Electric, Petter quickly got to work on some of the sharpest specifications coming out of the Ministry of Supply – first for a high-altitude, high speed jet bomber to succeed the DH98 Mosquito that would emerge as the Canberra (and prove just as good at low altitude); and then its apparent nemesis in a high-speed high-altitude interceptor that would become the Lightning.

In 1958 the groundbreaking business was re-established as English Electric Aviation Limited, but the bell had already tolled for the golden age of British aircraft design.

Indeed, the P.1B Lightning prototype made its first flight in the very day that Duncan Sandys rang down his infamous Defence White Paper on the British aviation industry – April 4th, 1957.

While the Lightning survived the government’s scythe (‘unfortunately it has gone too far to cancel’) English Electric Aviation could not, and the company became one of the major constituents of the new British Aircraft Corporation (along with Bristol, Vickers and, later, Hunting Aircraft), or BAC, in 1960.

The rest of E.E.’s concerns would ultimately be rolled up into GEC in 1968.

The pursuit of value for money

BAC would continue to build Lightnings and then support the fleet until they were progressively retired in the 1980s. Three hundred and forty-five Lightnings of all models were eventually built, most of those going to RAF squadrons.

Despite the upbeat advertising, export orders only came from Saudi Arabia (47) and Kuwait (14). Lightnings were famously difficult and demanding to maintain. Its tight mission dedication also undermined the level of flexibility that operators of expensive military jets increasingly expected in the pursuit of value for money.

On the other hand, blistering performance made the Lightning a potent weapon right through its 30-year tenure, and even at the end it could still show far more modern jets a rapidly disappearing pair of flame-filled tailpipes (or a rapidly approaching gun muzzle, depending on your place in the fight).

It wasn’t ever aviation’s development that outpaced the Lightning, but avionics’. In  particular, that gaping nose with its distinctive steel shock cone was exactly where ever larger and more capable combat radar antennae needed to go.

And so the Lightning needed to go too.

A legend in it’s own lifetime

Incredibly, several examples blazed on in private hands. Finally though, even South Africa’s Thunder City found the Lightning fantastically and fatally difficult to maintain – and flights were ended in 2010.

Unlike a lot of claimants, the Lightning really was a legend in its own lifetime. Several examples can still be found in museums across the UK, Europe, the Middle East and South Africa. Two are currently in the US.

If you’d like to know more about this incredible aircraft, I can recommend a lengthy visit to Thunder & Lightnings.

1. All comparative reports via Wikipedia

7 thoughts on “Lightning for sale”