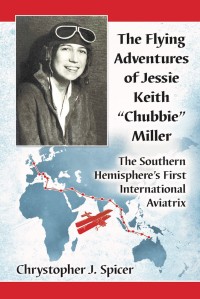 Even before I started it, I had a feeling I was going to enjoy this book. Well, I wasn’t disappointed.

In almost every sense, The Flying Adventures of Jessie Keith ‘Chubbie’ Miller is the essential companion to Bill Lancaster: The Final Verdict by Ralph Barker, which I reviewed in April 2016.

And there, I’ve already gone and done the inevitable – attached Jessie Miller’s story to Bill Lancaster’s. The trouble is the two are inextricably linked, just as they were from the day Miller and Lancaster met at London’s Author’s Club in 1927 to talk about his plans for a solo flight to Australia.

While Bill Lancaster would always be the defining character in Jessie’s life story, this never becomes a book about him. Drawing on years of meticulous research through newspaper reports, Jessie’s personal notes and diary entries, as well as rare interview transcripts, Chrystopher Spicer has finally given this groundbreaking aviator a voice of her own.

His plans for a solo flight…

Those words are a big clue to Miller’s unique abilities and the reason she deserves to have her own remarkable story shouted from the rooftops. And, I have to say, Spicer has done a remarkable job of doing so.

By any measure, Jessie Miller was a very significant aviator and her accomplishments still stand as an example and inspiration to anyone with an interest in flying.

As Spicer writes in the first line of the book’s preface: Before Amelia Earhart, there was pioneer Australian aviatrix Jessie Keith Miller. Before her, no woman had ever travelled so far in the air or even crossed the equator above the planet’s surface…

He goes on to point out that Earhart’s 2,250 mile transatlantic crossing of June of 1928 was merely as a passenger aboard a large, sturdy Ford Trimotor. The previous March, Jessie Miller had completed a 14,000-mile trip as co-pilot of a tiny, two-seat Avro Avian, surviving crashes, mechanical failures, appalling weather and even a poisonous snake in the cockpit. What’s more, she’d done most of the planning, fund-raising and map preparation for the flight.

Following that global odyssey, Jessie would go on to an amazing aviation career in the United States. She flew in the inaugural National National Women’s Air Derby of 1929, finishing 3rd in the light aircraft division; she won the pylon speed race for women and came third in the women’s pursuit handicap race at that year’s National Air Races in Cleveland. Then she finished the Ford National Air Tour for 1929 in eighth place on points, first in her class, and first of the three female entrants.

In that light, it seems absolutely incredible that this extraordinary young woman’s career could ever be forgotten in her native Australia, let alone in the world of aviation.

Miller was born Jessie Maude Beveridge on Friday the 13th of September, 1901 – first child of the bank manager for god-forsaken whistle-stop mining town in Western Australia’s vast, hot inland. Mercifully, the family moved to Perth in 1905; Broken Hill, NSW in 1907; Timaru, New Zealand, in 1916 and finally back to Melbourne, Victoria in 1920.

Sick of being uprooted and repressed by her family’s highly religious lifestyle, the independent-minded Jessie married at the first chance she got – unfortunately an amicable but ill-suited match with Melbourne journalist Keith Miller.

Before long, Jessie realised she wanted more out of life and went to England for six months, travelling with a girlfriend on third class tickets. In London, she was introduced to Bill Lancaster at a  party and quickly convinced him that she was the key to his long-distance aviation dreams.

And that’s where we came in…

As well as any man…

I was particularly struck by the differences in details of the 1927/28 England–Australia flight when told by Lancaster’s and Miller’s separate biographers. While Ralph Barker casts Lancaster as the intrepid Captain of the adventure with Jessie in a supporting role, Spicer turns the tables to reveal the true depth of her contribution.

For example, in Bill Lancaster Barker simply recounts that Miller had her first flight on October 7th, 1927 ‘and they were both relieved to find that she suffered no air sickness.’ In contrast, Spicer is able to reveal that Bill had arranged for an RAF friend to give Jessie ‘a lesson or two’; that she found flying ‘quite marvellous’; and that she emphatically soloed the Avian before they left.

It turns out Bill Lancaster felt she was a natural pilot. Later, the great Eddie Stinson would write that she flew as well as any man he ever met.

The difference in detail continues throughout the account, from Jessie changing spark plugs, working on the engine and performing the daily pre-flight checks herself, to that time she had to bash a venomous stowaway with her removable joystick and throw it’s still-writhing body over the side.

Long before the snake incident above Rangoon, she had taken over responsibility for the safety of the adventure, learning the hard way that it would be dangerous to rely on the cavalier and somewhat careless Lancaster. In fact, this side of the story raises serious doubts about whether Lancaster could have survived the flight without her.

His eventual demise, after crashing in the Sahara at night during his 1933 attempt on the London to Cape Town record, only underscores it.

As the profile of such a resilient, capable and independent woman emerges, Spicer is obviously struck by how she was treated by the media at the time. The public may have been fascinated by aviation in 1928, but they still didn’t seem ready to believe that a woman could do everything male pilots could.

He regularly includes details of the way journalists reported on Miller – how they remained persistently obsessed with her wardrobe, make-up, comfort and, by unstated association, her inevitable feminine delicacy as she undertook various flying adventures.

Spicer tackles the prevailing gender bias of the time squarely and fairly – highlighting the ridiculously condescending lines of questioning that Miller was subjected to throughout her career, but generously casting them in the context of the era.

The phenomenon began before Miller and Lancaster had even left Croydon, England on their flight to Australia, with the media focusing on her clothes and luggage over anything else, including the 8,000 mile flight’s actual prospects.

This patronising ‘journalism’ reached a nadir during the 1929 Women’s Air Derby in the United States. As Miller and 19 other female pilots crossed the country, experiencing all the trials and triumphs that followed the men’s races too, the media obsessed about their feminine requirements while others tried to have race cancelled because it was too hard and dangerous.

The name one newsman bestowed on the race’s memory says it all: ‘Powder Puff Derby’. Powder puff journalism, more like.

Of course, Spicer reveals the prejudice from a viewpoint in our enlightened age… which only raises questions about whether things have actually progressed that far. After all, women are still hugely under-represented, and under-represent themselves, in flying. Plenty of people – including Miller and her original Ninety-Nines sorority – must have expected so much more.

I’m sure we all hope Jessie Miller’s long-ignored story will help tip the balance.

For that reason, if no other, Miller’s amazing story has been lost to history for far too long – overshadowed by her garrulous flying partner, his scandalous murder trial and haunting 30-year disappearance.

Apart from being the first person the media called when Lancaster’s crash site was discovered in 1962, Jessie had quietly disappeared from the aviation headlines.

That was her personal choice. But I still feel her achievements belong to aviation and aviators. They are instructive and inspiring, and I highly recommend discovering them for yourself.

After all, this isn’t a book about gender politics – it’s a thrilling and long-overdue flying adventure.

The Flying Adventures of Jessie Keith “Chubbie” Miller is published by MacFarland Books.

You can order it directly from them or through your favourite bookseller.

14 thoughts on “Significant other”